Those that know me will recognise that I am my no means an eco-warrior. I love cars, motorways, air travel and all the conveniences and luxuries of modern life too much to really have any credibility as a true eco-warrior.
Yet that doesn’t mean I don’t care about the environment in which we live.  I am now going to start a rant – so be warned this blog entry is long and fiery and I hope it motivates people to enter into some form of debate here in sleepy Andalucia. 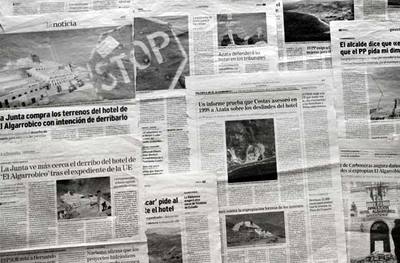 My attitude to the environment as changed since I began my new life in Spain. It probably sounds inconsistent, but since the environment here is so
different for me, somehow exotic, I notice more the impact of its destruction. Seeing a lush green field in England turned into a supermarket didn’t really have much resonance for me – well, there are plenty of fields, right? I realised how
flawed that argument was when I moved here. I could see the exceptional speed
with which land is eaten by construction every year, with little thought about
planning, architecture, sustainability or aesthetics.Andalucia, I believe is an interesting case study for challenges
to control the impact of urbanisation. Firstly, historically it has been the one of the poorest parts Spain, so welcomes development and the jobs and wealth they create with open arms. Secondly, the area, sadly, is less sophisticated in terms of social democratic structures, so the autonomous government, the local town halls, the judicial system and the independent tribunals etc, are all somewhat badly run, ineffective and prone to corruption.
In a country with a young democracy, there are few effective checks and balances. Thirdly, you have a population of relaxed, laid back Andalucians that really don’t like conflict – when things go wrong, they are more willing to accept it than to challenge it. In the UK, when
things go wrong, it mobilises debate in the media, amongst individuals in the pub and sometimes brings people out onto the street. That’s not often the case here.That’s why the operation here in Marbella against corruption is so interesting and so important. It shows that the tide is turning against the madness in construction in Southern Spain. Marbella is a beautiful part of the world and the environmental cost of the corruption in urban planning is not as bad as it could have been. Hotels, office blocks and homes have been built illegally with the support of the
former corrupt town hall, accepting exceptional amounts of bribes fromdevelopers and land owners, together with the complicit support of the regional government, the Junta de Andalucia. Yet luckily the city still remains a
beautiful place. However, across the coast in just the few years I have lived here, I have seen the price of the appalling mess in Andalucian town planning.
Closer to home, in Manilva the ancient vineyards that date back to Roman times have been butchered by the construction of illegal luxury
holiday homes. Luckily, here too the corruption has been uncovered and construction stopped. In fact some of the homes are been
knocked down as a signal to developers and investors that things much change; but this was only possible since the homes were not sold. Once foreigners have bought the holiday homes, it is almost impossible for the land to be recovered, as the impact on the holiday home market would be immense if people were to start to lose their homes without adequate compensation.For me the most depressing example so far of the madness in
planning here is in the natural park of Cabo de Gata in Almeria. 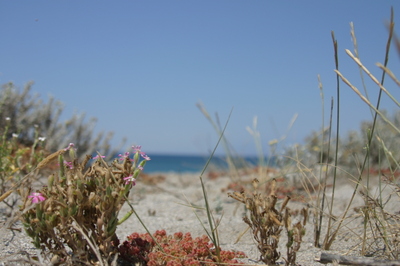 Yesterday we came back from Almeria, where we are spending more time, as Rafa is working there once a week. We explored more of the stunning Costa de Almeria, with its unique Cabo de Gata Natural Park. Yet, as we drove south through stunning scenery we were abruptly greeted by a huge concrete pyramid – a structure of over 20 stories high, starting from less that 50 metres from the beach, climbing right up the mountainside. This was a huge hotel under construction,
within the natural park!
Can Spain really be trusted with its Mediterranean coastline? As members of the European Union, this is a part of Europe. This stunning coast is unique in the entire Mediterranean, and should be protected for all to enjoy – yet here was see a monstrous structure, blatantly contrary to all planning laws.
I was in shock. I wanted to find out more.  There is little public debate about these
issues here in Andalucia. People have worked and lived on the land and for
most, it is just a resource. Just as say a former Rover car worker probably has little nostalgia or feeling for the old Longbridge factory in Birmingham. It’s just a work place – nothing more.
I believe though, that the countryside has to be afforded some protection. There is enough space in Andalucia to easily accommodate the huge demand for holiday homes, hotels and new communities – it just has to be zoned. Somehow people have to be educated that the land, once destroyed, cannot be restored. Unlike a historic factory or mill that has fallen into disrepair, a carved up mountain side can never be
restored to its former glory.
The huge hotel in the Cabo de Gata Natural Park is called “Algarrobico” and is slowly becoming the symbol of the fight here in Spain
against corruption in town planning. “Amigos del parque natural de Cabo de Gata” are an eco group that has taken the battle to Europe. The local town halls and the Junta de Andalucia are so corrupt and out of control, that Brussels is now looking at
the issue. “La corrupcion urbanistica empieza a manchar la imagen de Espana”, reads the first line of a report in the group’s newsletter. Basically,
the Friends of the Natural Park are highlighting how Spain’s image in Europe is being stained through the illegitimacy of its town halls. International bodies such as Transparency International see that corruption in Spain’s town halls
and especially those in Andalucía is almost out of control. Democracy is young here and the generation that lived off the land and lived under Franco are still alive. So the challenges to build a transparent and accountable regional and local government system are
hard. Transforming poor communities through cheap, profitable construction is far more seductive.
The illiterate, unemployed and disenfranchised in the country villages of Andalucia seem unable to comprehend the negative impact of the
Junta de Andalusia’s flawed policies – or at least seem powerless to stop it.. Andalucia still has some amazing natural and cultural heritage that attracts high net worth tourists that are essential to the region’s diversification away from the kiss-me-quick holiday makers that come to eat egg and chips in the sun.

Wake up Andalucia, or soon it will be too late!

If like me you want to do something about this – then make adonation to the Friends of Cabo de Gata Natural Park, by visiting their website
at www.cabodegata.net

MAY 2013 – Since I wrote this blog entry almost 7 years ago, little has changed!  The hotel remains standing – and what’s worse there are now planning to build on the virgin beaches in Tarifa.  Spain has learnt nothing when it comes to environmental protection.

For an update, read this article in El Pais in English.

Previous: Sounds of silence?
Next: Saturday afternoon at the market with Rafa

Glamping on wheels: a roadtrip with ‘Pepa’ the campervan

Sitting on a gold mine – Almeria’s geological heritage