Malaga city’s art scene got a significant boost recently with the news that in 2015 ‘El Centro Pompidou de Malaga’ will open its doors, in a new space on the city’s revitalised quayside, Muello Uno. This will be the first Pompidou centre to open outside France, and is a clear endorsement of Malaga cultural credentials. In addition, the Malaga Museum is finally set to reopen in the immense Customs Palace in old town, consolidating the city’s position nationally and internationally as a cultural destination. This renaissance in Malaga’s image began many years ago, and continued to be enhanced with the opening of the Picasso Museum followed later by the Museo Carmen Thyssen. These have joined established venues such as the city’s contemporary art centre, CAC, and Picasso’s birthplace foundation, ‘Fundacion Picasso’.

Yet, to make a city a genuine cultural capital it takes more than high profile museums, galleries and foundations. It needs an artistic energy from local and visiting artists, performers and writers to drive creativity.

It’s this movement that is evident in Malaga. There is an energy and creativity that goes beyond the state endorsed and supported arts and this is truly evident with some of the creative street art in the city. Yesterday I was in Malaga and took a moment to walk through the city’s SoHo area and take a few phone shots of street art installations.

Buildings in this city centre neighbourhood, found just south of the main Alameda thoroughfare, are now the canvases for both emerging and established artists who use spray paint, stickers and stencils to share their perspectives on the world.

To some extent it’s contrived, sponsored street art – but it’s had a remarkable impact on the neighbourhood, which has undergone significant renewal.

In recent years Malaga has attracted street artists with cult followings from across Europe and beyond, to showcase their works.

Malaga’s SoHo district is establishing itself as a focus for this type of unconventional, urban art. The neighbourhood is south of the main thoroughfare entering the city, the ‘Alameda’, and runs down to the port, the area known as Muelle de Heredia. Despite its central location this once fashionable district became forgotten and rundown – a perfect location for street artists who typically embrace central urban areas with potential where they can communicate with the public.

On a walking tour expect to see examples of street art by international names including Belgium’s ROA; Obey a.k.a Frank Shepard Fairey from the US; China’s DALeast; D*FACE a.k.a. Dean Stockton from the UK; Ben Eine also a Brit; Andalucía’s Andi Rivas; Pejac a.k.a. Silvestre Santiago from Santander; and other Spanish artists including Manuel León, Javi Calleja, and Felipe Pantone. 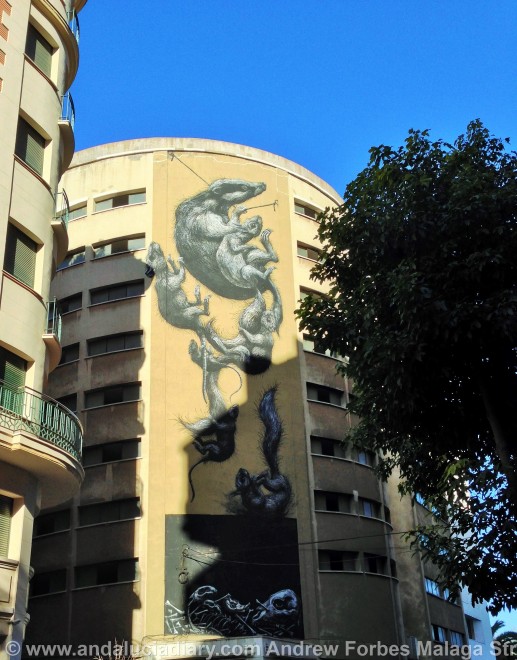 ROA, the internationally acclaimed Belgian street artist, with his distinctive style of depicted animals, has come to Malaga and created some very distinctive pieces including the chameleon in Calle Casas De Campos and the rats and badger, clinging to a nearby tower block.

SoHo has now been christened the ‘Barrio de las Artes’ – the Art District. Malaga’s Centre of Contemporary Art borders the quarter to the west and has played an essential role in the transformation of this area.

I really recommend a walk through SoHo the next time you are in Malaga. There are a number of fascinating, striking and impressive murals and paintings that decorate uninspiring, sometimes dilapidated buildings – so just explore and see what you find! 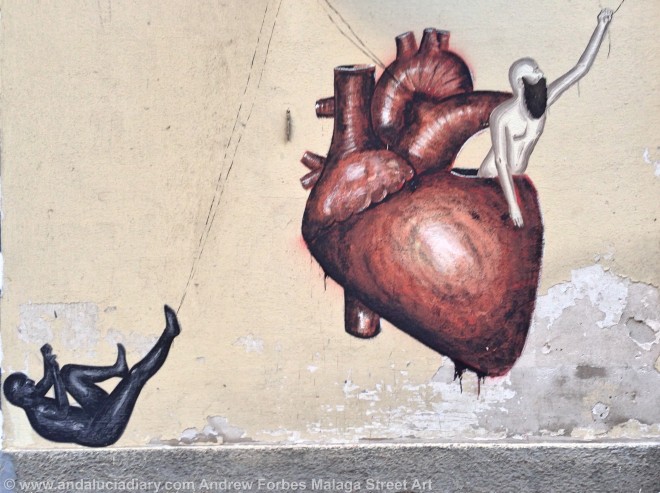 Malaga’s urban art scene, under the umbrella of MAUS (Malaga Arte Urbano Soho – find them on Facebook) has invited a number of well-known street artists to create works for the area. These public installations are creating significant footfall, and the Soho Malaga is becoming once again part of the city. Streets are being renovated, and where once there were just sex shops and vacant units restaurants and bars are opening.

In addition to ROA, Chinese muralist DeLeast also came to Malaga to create an amazing piece – thousands of ‘birds’, made as if from twine, bursting forth from a giant bird, that appears to be a huge nest. 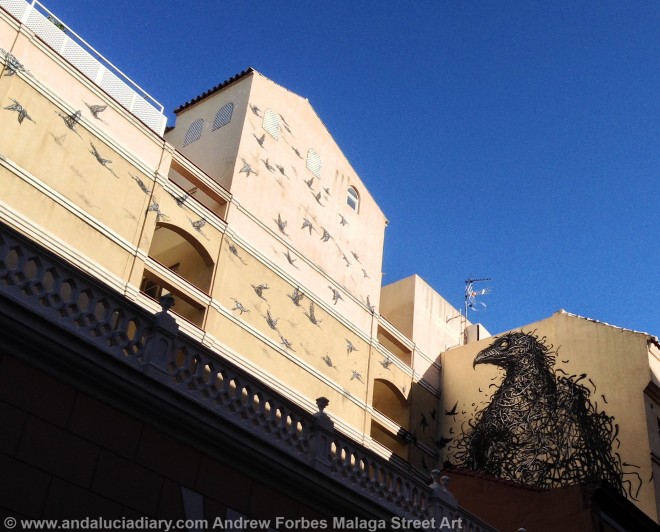 Whilst a little further down the street is a work by US artist Shepard Fairey. You can read about the installation on his Obey blog here. I didn’t have my camera with me just my phone, or much time, but there are many more murals, and art to see – I look forward to updating this entry!

11.03.2014 – As promised, I am updating this entry with a picture of the huge mural by D*Face ‘I’ll put an end to those flying D*Dogs if its the last thing I ever do’ and ‘Peace and Liberty’ by Shepard Fairey (OBEY) – both on the apartment building above the García Lorca school. 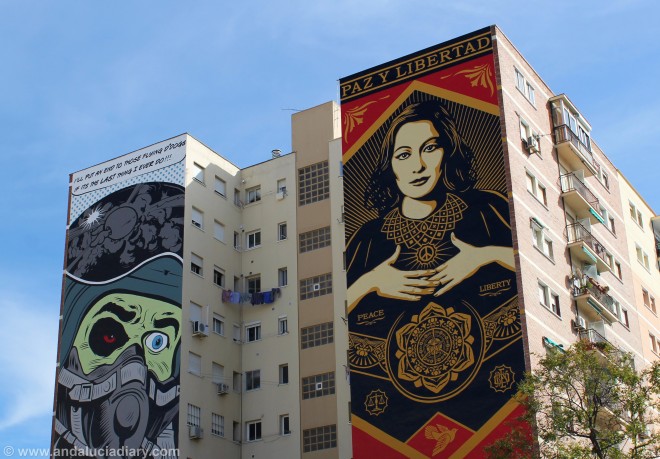 Interestingly, the derelict iconic tower at the bottom of Calle Larios (La Torre Equitiva) is reportedly being purchased by Chinese investors to convert into a 5 star hotel – watch this space.  So head down to SoHo now, before the area becomes completely gentrified and absorbed into the commercial mainstream, just like the SoHo districts of NYC and London.

(BTW, if you are looking for somewhere to eat in the area, I really like the north African restaurant Araba Al-Yamal).

Pescaito in Malaga – the taste of summer